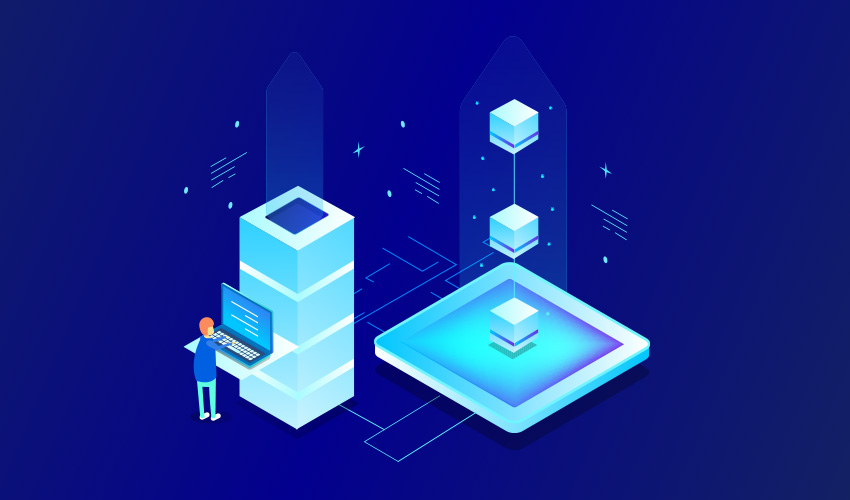 Any good discussion on blockchains is never complete without addressing the scalability challenge. That’s because Blockchains are a fundamental breakthrough technology (no two thoughts about it) waiting to unleash a whole new wave of possibilities in the world of commerce. And any blockchain that isn’t scalable will only stop short of the disruption it promises to bring in the first place.

Now before we unlock all the reasons why scaling must be ingrained in an enterprise blockchain, we must first understand what we do mean by ‘scale’ in the context of blockchains.

As often, scale is thought of as something as ‘big’, but in blockchain, we really mean the speed of that blockchain. How fast can it process the transactions and add new entries to the chain? For instance, in Bitcoin, the number of transactions performed per second is 4.6. Now compare that with Visa, which does 1700 transactions per second. The underlying multiple benefits of blockchain architecture such as decentralization, security, immutability, privacy takes a beating when viewed along with its transaction speed. While efforts are underway and there has been progress concerning increased transactions per second some way or the other, Scalability is still an ensuing problem not just in public blockchains, but also in permissioned and private blockchains.

But first, a more basic question!

Before we go gaga about why Scalability is imminent in an enterprise blockchain, we must ensure we have the right answers for a more basic question:

Why do we need a blockchain in the first place?

Blockchain, as you might know, is a decentralized, shared database, one that excludes intermediaries and functions without a central authority. A private blockchain, on the other hand, is controlled/owned by a single entity for its organizational use.

So when does an organization need a blockchain?

Organizations can choose to adopt a blockchain implementation if information privacy is at the core of their business. Blockchains can prove to be too good at safeguarding sensitive data, enabling secure message transfer between parties.

Organizations can opt for blockchains when they want to instantly trace products at the level of their supply chain. Supply chains involve multiple parties and a product often has to go into multiple stages before it reaches the customer. Being able to instantly trace a product, improve transparency along the chain and cut administrative costs would be no lesser than a disruptive innovation in the supply chain space.

Digital data records, IoT ecosystem protection, CRM systems, and management of digital assets such as intellectual property are some of the many use cases that you could reap from a successful blockchain implementation.

But all the above uses of Blockchain implementation could only be realized if the underlying blockchain architecture supports scalability. That it can allow more users to participate, that the base layer can accommodate a huge network or business resources thrown at it. Only then a blockchain could really stand to immensely benefit enterprises.

Let’s approach this from a better angle.

Adding more resources to an existing blockchain network would only affect the throughput of the blockchain. In other words, for every additional transaction that is performed on the blockchain, the time taken for it to be validated and authenticated by all nodes is in direct proportion to the number of nodes in the network. In that case, the whole blockchain network, even if it accommodates more users and ensures unmatched security, would only turn out to be slow and sluggish. Because simply put, the higher the number of users, the slower is the system. Now question to you – would the users of your blockchain be prepared to forego the speed for better security? If your answer is no, then we are talking sense here. Scalability must be really dealt with.

So, a blockchain which is nothing but a distributed database coming in place of a legacy centralized database, claiming to bring along a host of business benefits (security, transparency, traceability), can never be complete without an inbuilt satisfactory speed. (A point to note: this speed can’t be lower than that of your already existing system.) So even if you increase the users in the network – these benefits, including the speed, must remain constant, and should never put a strain on your permissioned blockchain.

Scaling on and off the chain

Yes, there have been numerous efforts to enhance scalability by changing the parameters of the blockchain. There are methods wherein by increasing the size of a block, you increase the number of transactions stored in a block. The other method entails decreasing the block generation time by tweaking your consensus algorithm. But these methods aren’t sustainable and can soon hit the roof. Because how much could you keep increasing the size of a block or reducing the generation time of a block? These methods can’t stand a chance when you are trying to match the speeds of an established transaction process.

However, there were more promising on-the-chain scaling techniques. Reducing the size of an individual transaction, which essentially means you are packing more transactions within a single block. Being able to make two different blockchains communicate with each other was again a potential way to scale. If multiple blockchains can transact between each other, they would not have to carry the same load of data, therefore the throughput should improve. Then there is sharding, which splits the chain into multiple chains, meaning you can facilitate parallel processing ensuring higher system speeds.

Off-the-chain solutions are a whole different lot. They sit on top of the blockchain and provide second-layer solutions. Technically, they take the computations off the blockchain only to be performed on a second layer, while the main chain can simply act as a means to register inputs and outputs.

And it is just getting started: more could be on the way!

We are already witnessing a combination of these methods – hybrid solutions to ensure scalability is not compromised while building a permissioned or private blockchain at the enterprise level.

But how cost-effective/profitable are these solutions proving to be?

This is where we come in!

At Blockedge, we help you deploy your enterprise blockchain app as more of a plug & play offering rather than a build-from-scratch product.

Instead of hiring resources en masse, you can run your enterprise blockchains at scale with just the inclusion of a few technical personnel.

So whether you have already found a blockchain use case for your organization, or if you are still probably exploring how blockchains can really benefit your business, you are free to talk to our experts at Blockedge. We will help you understand how a blockchain can be made viable unique to your enterprise, creating business impact in the short run and subsequent business transformation in the long run.