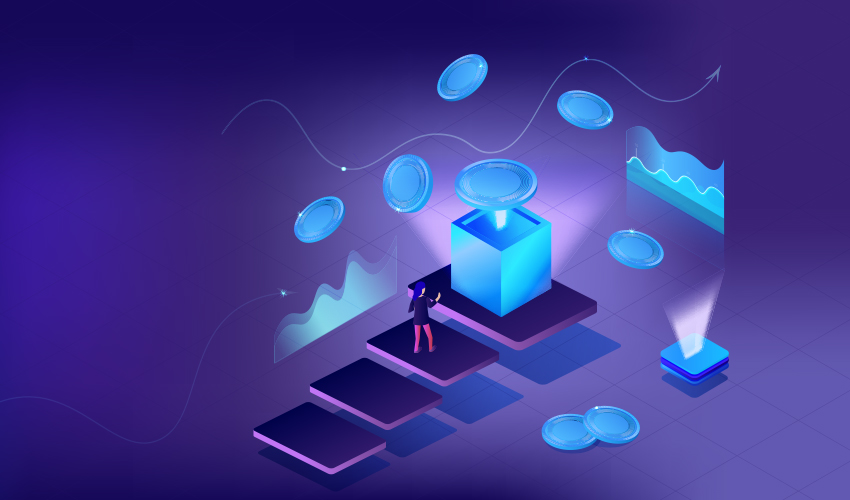 Home » Why Tokenization on the Blockchain Makes Perfect Sense for Enterprises?

In general terms, a token denotes a particular asset or utility. But, do you think tokenization started with blockchain? Well, the concept of tokenization has been used since the 1970s by the financial industry to protect their clients’ confidential information. Let’s look into some real-life examples. If you have bought or sold shares on the stock market, you have used the concept of tokenization. If you’ve used Apple Pay or Google Pay and paid using NFC (Near Field Communication), you have used tokens for security in this process.

For the stock market example, let’s assume that the company is valued at $1 Million and opens with an IPO of 100,000 shares. Each share is now worth $10. If you own one such share, you own 0.001% of the company. Here, the “value of the company” is broken into parts (or tokens), and you can conveniently buy a stake in the company.

The image below explains the concept of tokenization in mobile payments.

In this process, the merchant got paid without ever seeing your personal financial information.

These were two of the most familiar common user examples of asset tokenization.

Asset tokenization on the blockchain

An issuer tokenizes an asset when they want to divide its ownership and sell it in parts. Buyers don’t need a lot of capital because they buy the asset ownership in segments rather than the whole asset.

As we have seen through examples, tokenization also plays a part in ramping up the security of the asset. Because records on a tokenized blockchain are immutable, any transaction of these tokens stays secure. No one can change a buyer’s record of ownership unless the buyer sells his token forward.

What types of assets can you tokenize with blockchain data tokenization?

Blockchain technology can help tokenize all sorts of assets from real-estate properties, bonds, and commodities to racehorses, sports teams, and artwork.

To simplify them, let’s group these asset types into 4 categories:

Anything that you or your business owns that you can sell for cash is an asset worth tokenization.

In the opening example, shares were the tokens representing the equity in a company. If blockchain stores these tokens, they will stay in a digital wallet.

Like a company’s equity, the investment in funds is also up for digital tokenization on the blockchain.

Companies can tokenize their services and sell them to interested buyers in exchange for cryptocurrency tokens like Bitcoin or Ethereum. These tokens will be non-exclusive.

Types of blockchain tokens on the enterprise blockchain

It is important to know various types of tokens before implementing tokenization on an enterprise blockchain.

If an asset is generally available in physical form with a specific monetary value, it falls under the category called “tangible tokens”.

What are fungible and non-fungible tokens (NFTs)?

When the underlying asset does not have a unique value (any generic digital asset) it features fungible tokens. These are divisible and is created in such a way that it enables an exchange of the same type of tokens. For example, Bitcoin is a fungible token. NFTs represent unique assets such as one-of-a-kind works of art or media clips. Unlike fungible tokens, NFTs are non-divisible and represents a single unique digital asset which is not interchangeable. CryptoKitty is an example of NFT where each CryptoKitty token is unique and users cannot exchange them like Bitcoins.

These are fungible crypto coins i.e. cryptocurrencies like Bitcoin (BTC), Litecoin (LTC), and Ethereum (ETH) whose value is dictated by the laws of supply and demand. Dedicated miners mine new crypto coins until they reach a maximum number. Their supply is limited. After reaching that limit, their supply closes off and their value skyrockets – at least theoretically!

These tokens are like Monopoly money. You can use them in a closed blockchain system to gain certain privileges or access to blockchain-based product/services. They unlock access to utilities (not digital assets) on a particular blockchain. Depending on the blockchain you get these tokens from, you may or may not be able to use them across your blockchain. For example, Gas coins give you access to the NEO network.

Blockchain security tokens are given in exchange for ownership in an operating asset attached to the blockchain. They become traditional assets like stocks and shares.

Most regulators identify security tokens by running a version of the Howey Test, designed by the United States Supreme Court, which lays down the following conditions:

Governments across the world want to regulate the trading of security tokens because they have massive legal and economic implications.

Several of the world’s countries or regions lack access to secure, affordable, and trustworthy financial services. A cryptocurrency-based marketplace can allow secure trading of goods in these regions. They will extend blockchain benefits to these areas at a very low cost compared to the cost of developing traditional banking systems with FIAT currencies.

This will unlock new high-growth markets for enterprises already using blockchains. For instance, Singapore Airlines launched a blockchain-based loyalty program to bring flexibility in the way users can redeem their tokens. They can redeem them for flights as well as spend them in retail locations.

Imagine Venture Capitalists investing in a company in exchange for security tokens. These tokens will have smart contract to guarantee secondary behaviors that would be triggered on complying to on specific conditions . For example, VCs could ask to code conditions like maintaining a specific ARR/MRR, customer acquisition trend, Revenue target for releasing new credit lines, which can be defined in the smart contract associated with the security token. They could also add governance natively into the tokens to protect shareholders.

Automated transactions will implement these guardrails and provide safety to VCs. They will allow founders new credit lines based on the performance of their company.

Data and value are separate in modern supply chains. If parties don’t satisfy standards laid in contracts, their contractors have to go through long and complicated legal processes to recover penalties.

If this were to happen on a blockchain, a smart contract could govern both data and value. So, a discrepancy in data would automatically result in a penalty or charge back that can be enforced through tokens . Making tokens a part of the protocol lowers the costs and increases the speeds of several processes in the supply chain.

Power networks have nodes consuming power at different rates. In a green energy grid network, nodes often double up and produce power too. What happens if they produce a high amount of unused power? They consumer can sell it to the grid or specific nodes on the grid in exchange for value. This opens up a whole new market for Peer to Peer Energy trading, which will slowly start becoming the norm along with building micro-grids.

Tokenization on the blockchain unlocks its key benefits

Tokenization has certainly transformed the way we transact with assets. Tokens are parts of assets that form blocks to be saved on the blockchain. Buyers can find affordable investments in parts of assets, and sellers need not find a single buyer to sell their entire expensive assets. Tokens can also help increase security by becoming a cover that stops sensitive information from being shared publicly.

On the blockchain, users can use payment, utility, and security tokens. NFTs are not used on enterprise blockchain yet, as they provide proof of ownership for collector items and cannot be traded like other fungible tokens. Over the course of time, as more and more people and enterprises accept the potential value of blockchain, tokenized assets would become one of the dominant digital tools. More so, enterprises can maximize the potential of blockchain technology by implementing elements like tokenization into their blockchain strategies.